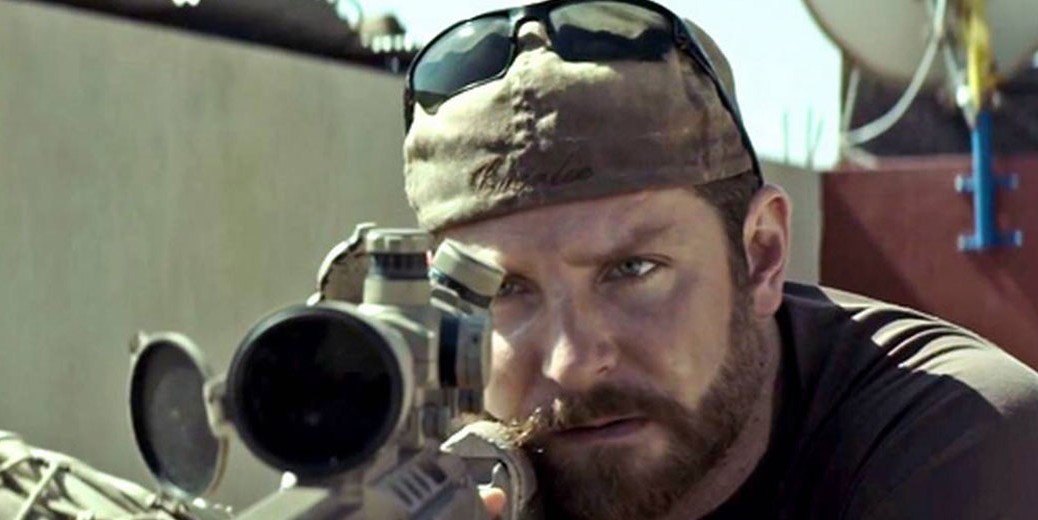 Thrusting the Marlboro man into the heart of modern-day warfare is a task which inevitably, and somewhat poetically, fell into the hands of Clint Eastwood. As director of American Sniper, he takes a cold, hard look into the tours of duty of Chris Kyle, a US Navy Seal and the country’s deadliest sniper, during the Iraq War.

Coloured with the palette of war, the film unfolds in browns and greys, constantly juxtaposed by the calm suburbia of Middle America. But underneath the calm bubbles the turmoil of the returning soldier who struggles to face his inner demons. The only escape from wrestling with the emotions which simmer beneath the surface is to plunge back into the fracas, which Kyle does again and again.

Bradley Cooper portrays Kyle in a tour de force performance, subtly yet powerfully revealing glimpses of supressed emotion. It’s not an easy task, considering the paradox he has to portray. Raised on the tenets of American patriotism and masculinity, Kyle clearly and resolutely outlines the part he believes he has to play as chosen for him by God and country. But when he’s peering through the scope of his rifle, there’s a world of doubt in his eyes.

Back home his faithful yet frustrated wife brings to mind the war poem by Ted Hughes whose “sorrowing was its own blindness” as she tries to understand her husband’s torment, while compelling him to answer the call of his duty at home. Sienna Miller, as Taya Kyle, delivers a good performance, but pales in comparison to Cooper.

Far more provoking is the polarisation of the Americans and their Iraqi counterparts. Despite his internal struggle, Kyle is continually heralded as a hero; while every Iraqi character remains flat and one-dimensional, depicted as either a barbarian or a coward. The script even goes so far as to borrow from Joseph Conrad, continually referring to the Iraqi as savages.

These binaries are dubious, and gave rise to inevitable controversy; but they also serve to emphasise that this is a film about one man, cementing the Western psyche’s focus on the individual. While the film may approach questions of honour and duty, it is ultimately an individual struggle – with little light cast into the heart of a nation.

Kyle’s rigid approach to duty and honour is quite literally underscored by a highly effective lack of music, leaving no room for sentimentality. Its ending, then, is a complete anomaly. In a story driven by the acts of men, particularly the individual, the phrase “actions speak louder than words” is pertinent. The ending is at the right moment, but the manner of its execution, completely baffling.

A sense of menace is delicately evoked as Taya peers out the door at what is to be the last time she sees her husband. This haunting moment is followed by a legend explaining Kyle’s death in one bland sentence. To see the scene played out would have had far more resonance. The grim tone which Eastwood so meticulously set throughout the film is further obliterated with a pack of grainy shots of the real Chris Kyle and the doleful tune of a bugle. The rest of the credits pull the film back to its previous melancholia as they roll in complete silence, questioning not war or patriotism, but rather the silence we find inside ourselves when the questions become too difficult.