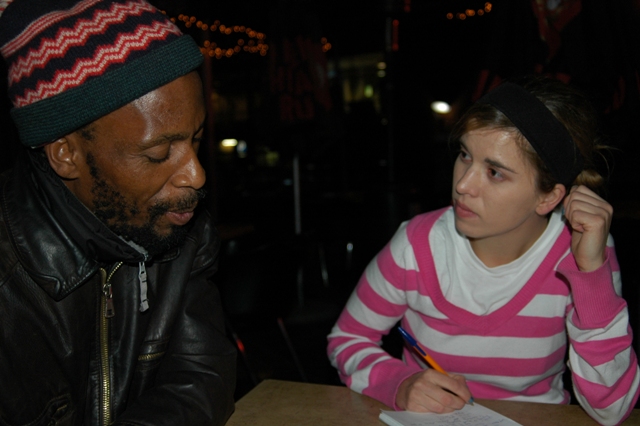 Huddled against the cold night air in big jackets and gloves, keeping their bodies and especially their fingers warm for their show, Jacob and Sam soon warm us up with their amiable conversation and easy-going nature. They are the driving force behind Tidal Waves, a successful South African reggae band who consist of Charlie (bass), Mr. Mans (lead guitar) and Abrie (keys) and, of course, Jacob on vocals and guitar and Sam on vocals and drums.

Tidal Waves are based in Johannesburg, but they regularly perform and tour the whole country. Their name is symbolic of their aim – just as waves increase in size, so the band aims to make music bigger, particularly reggae, as it has the potential to change the world. Their motto, which is chanted throughout their shows, is “Original music! For original people!” Starting out in 1998, a friend encouraged them to play their own music instead of just doing covers – and that is exactly what they did. Citing South African artists as their most significant inspiration, their influences stem from Afro-soul, but the late and great Bob Marley is also attributed. They also acknowledge their respect and admiration for South African bands such as Harare and Stimela, which have been around for decades.

Tidal Waves have created a fresh and unique sound that still stays true to the origins of reggae. Their songs cover diverse and important issues – from love to the crippling influence of money on society. With our country’s motto being “unity through diversity”, these talented musicians promote and achieve this ideal. They sing about issues pertinent to this country, as well as the world; but by highlighting the positive they give people hope, along with enlightenment. They do so in many different languages – including English, Afrikaans, Xhosa, Tswana and even Maori.

One of the most refreshing things about this band – besides thrilling their audiences with their energised performances – is their work ethic and passion for their art. Jacob emphasises that as a musician “you need to know the language of music and you must be aware of yourself and your attitude and know how to exhibit your art”. Music is thus a combination of art and business – know what you’re about and know how to put it out there and you will reach people and change lives. And these guys know something about hard work and business: “we grew up as an independent band and had to do a lot on our own”. Their aim is “to change people’s perception about reggae and life as a whole”. Tidal Waves is definitely leaving their mark and spreading the love. The best part of it is that their reach is extending beyond South Africa. They have played in many different countries including Belgium, Italy, the Netherlands and New Zealand. Asking them about their ultimate gig, they reply “Jamaica”. Reggae having developed there, it makes sense and the thought of Tidal Waves performing there is an exciting one.

However, no matter where they play they fill the space with their presence and energy. Between his vocals and guitar Jacob also throws in the harmonica and the vuvuzela and it is amazing to watch Abrie’s entire body being consumed by the music. Their hard work, passion and commitment have paid off – they’ve won a Channel O award for Best Reggae Music, played the acclaimed Pukkelpop festival in Belgium and naturally our very own Oppikoppi. But their biggest success is their contribution and inspiration to SA music. Sam says the country’s music industry “is very confusing and you don’t see what’s going on”, but in spite of this they remain positive and encourage making a living of music. It is hard work, but it is possible – as they say “we do music”. They also point out that foreign countries are becoming more exposed to SA music and “the world wants South African music”; so there is a lot of room for growth and development with the increasing market.

Sam and Jacob stress the importance of being professional and, above all, to stay true to what you do on stage – in essence: practise what you preach. The key to their success, besides their hard work and passion, lies in the control they have. They keep things running smoothly by controlling, and thereby maintaining, their common and original ideals; but they also point out that “you cannot control individuals”. Through this they acknowledge individual differences and keep the peace. And their advice to aspiring musicians out there? “Humble yourself, but don’t allow yourself to be treated like shit”. I think that’s something all of us can apply to any aspect of life.