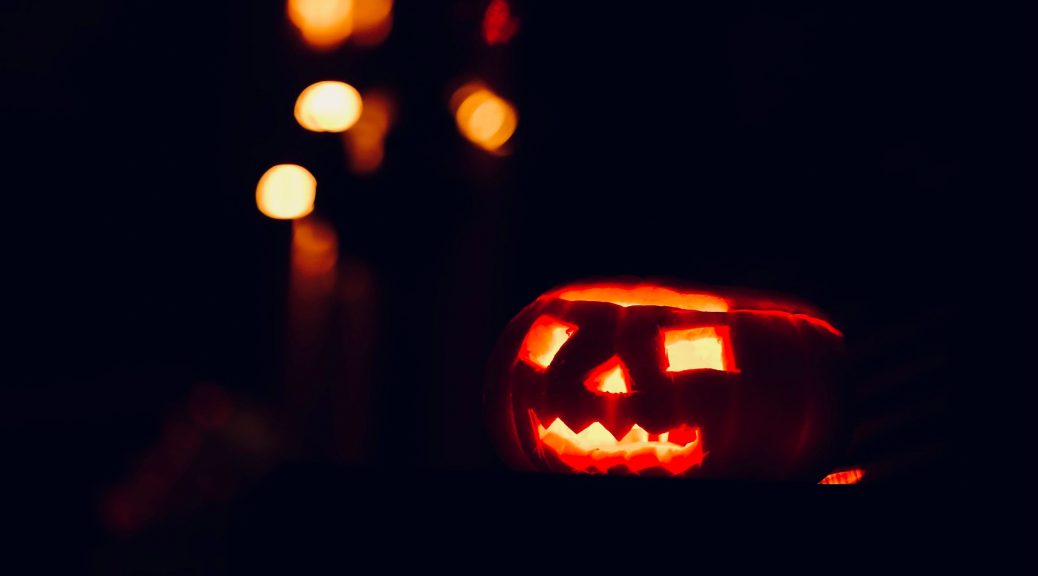 Halloween month could not have started more appropriately. With dark skies and rumbling thunder, the atmosphere ushered in the spooky season perfectly. Keeping to October’s theme, I set out to read and watch horror, or anything with a mysterious or magical element.

Jamaica Inn by Daphne du Maurier
Not strictly a horror, Jamaica Inn nevertheless has a wonderful sense of atmosphere. When I started reading it, the day was dark and stormy outside and in the book. I fell in love with du Maurier after reading Rebecca and enjoyed her time-travelling novel, The House on the Strand, just as much. This Cornwall-set thriller reaffirms my adoration of this author. She really knows how to set the mood and build suspense. I absolutely loved the protagonist, Mary Yellan. After Pippi Langstrumpf, she is my favourite literary character. I’d watched the Hitchcock adaptation years ago, but couldn’t remember much of it, besides the moody atmosphere. It’s as mysterious and eerie as in du Maurier’s book, making it little wonder that the master of suspense loved adapting her work.

Murder in Mesopotamia by Agatha Christie
Murder in Mesopotamia has all the elements of a classic Christie novel, including the little Belgian detective Hercule Poirot. Despite his appearance, the story is narrated and centred on a young nurse, Amy Leatheran. It’s set in Iraq and follows the exploits of an archeological dig – a subject matter close to Christie’s heart, whose second husband was an archaeologist whom she accompanied on digs, like one of this book’s central figures, Louise Leidner, does. As usual, everyone in the story’s a suspect, and the killer is as surprising as ever.

The Shuddering by Ania Ahlborn
This was my first proper horror novel of the month. Although I loved the classic cabin in the woods trope, the book does not try to do anything new or exciting with it and the whole thing plays out like generic, kids-buying-the-farm fare. The characters were also wildly irritating and unlikable, stuffed page to page with gender stereotypes. I was just waiting for them to get picked off. One of my first points of no return was when the characters talk about The Sound of Music being set in Switzerland (it’s not). I don’t know whether this was an attempt to make the characters appear ignorant or whether they are referring to the end of the film when the family flee to Switzerland – but whatever it was, it was unclear and just came off as poorly researched.

Furthermore, the first victim of the beasties that plague the annoying, entitled characters, is also unfairly maligned and judged by the author and the rest of the characters, and not only is she picked off first but you never find out whether she is actually dead or not. I don’t read a lot of horror, but I loved the horror novel I Remember You by Yrsa Sigurðardóttir so much, that I’ve been excited about delving deeper into the genre. Unfortunately this experience didn’t match my previous one.

Sleepy Hollow and Other Stories by Washington Irving
Growing up, I loved the Disney animated version of Sleepy Hollow. I’ve long wanted to read the book and finally got to it, and at the perfect time of year too. It’s actually a short story, and is one of the most faithful adaptations Disney has ever made. Sleepy Hollow is renowned for its setting (giving the story its title) and atmosphere – something the film captures perfectly, along with the charming whimsy and gangly physicality of Ichabod Crane.

There are a few other short stories in the collection woven with the spooky and supernatural, there’s a romantic tale or two, and an interesting piece on the treatment of Native Americans. Considering that this was written about 200 years ago, it shows that society has long been aware of Indigenous people’s marginalisation and yet it continues to this day.

The Valley of the Spiders by H.G. Wells
Wells is more of a science fiction writer and while there are certainly elements of it in this collection of short stories, there’s also a lot of horror and the supernatural. This book has been sitting on my shelves for years, and upon perusing them for Halloween material I was pleasantly surprised that this book was a great fit. Filled with stories of hauntings, trapped spirits, possession, and creepy creatures, it was a perfect Halloween read.

Changes for Samantha: A Winter Story by Valerie Tripp
The final book in the Samantha series sees the title character living in New York with her aunt and uncle. It also brings her best friend Nellie back into the picture and closes the series on a very rose-tinted, happy ending.

The Glamourist by Luanne G. Smith
The second book in The Vine Witch series, I read this practically in one sitting (during a readathon). I’m really enjoying this series. I initially thought the second book would be set at a different time, with different characters, just utilising the same setting and themes. Instead it carries on almost directly from the first book. Enough background and context is provided to catch you up on the previous book’s plot (in case you haven’t read it – which you should!), but the story stills stands on its own. This time round the focus is on Yvette, who was previously a secondary character, with former protagonist Elena taking a supporting role. I’m already looking forward to the next one – although I have to wait till January, when it will be released.

My next read is Thomas Olde Heuvelt’s Hex, which I started listening to on Audible and will only finish in November. But seeing as it’s part of the horror genre, I’m giving it a mention – along with Sweet Valley High #105: A Date with a Werewolf, which I found in a secondhand bookstore on Halloween. I’ll spend the day with these books – along with candy corn, trick-or-treating, and a  horror movie.