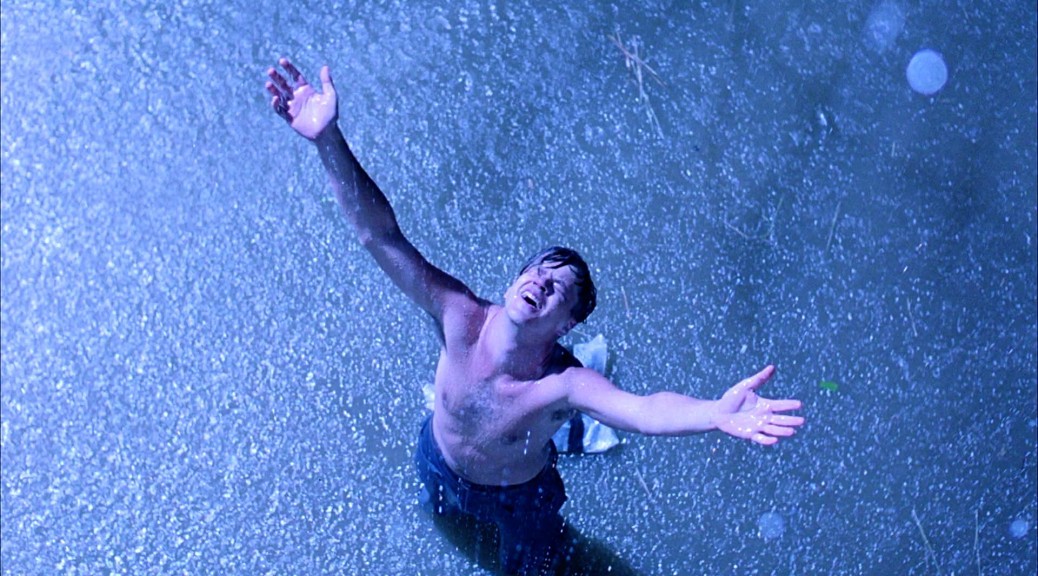 I am embarrassed to admit that I have never read a Stephen King book. However, the film adaptations of his books do exist as a genre on their own and I am sure there are plenty of people out there who watch these adaptations without having read the book first.

My general opinion of these adaptations is that either I love them because they are so unique and well-crafted or I dislike them because many aspects of the film are poor. I must reaffirm that this is only my opinion and many of the Stephen King films I don’t enjoy are loved by others.

Nevertheless, there is no denying his indelible mark on the film industry. He is most widely known for his horror stories, but there are a few others that deviate from this category.

For years I avoided watching this film because people said it was so scary, but I think the people who told me that must have had a clown-phobia or maybe it’s just that I appreciated Tim Curry’s colourful (excuse the pun) performance as Pennywise the Dancing Clown. It feels like a horror version of The Goonies: a bunch of nerds on an exciting adventure, although with somewhat more devastating consequences. I was surprised to discover that It was actually released as a TV miniseries. I watched it all in one go and, despite the length, the fast pace moves the story along. The film also has an allusive nature, which keeps you in suspense and then makes you jump when it comes to a sudden horrific image or moment. In this film, as in several other Stephen King adaptations, one of the main characters is a writer, making King’s presence a little more palpable. Overall, it really isn’t that frightening and can lean towards the comical; but if you feel somewhat nervous the next time you see a clown just tell him “I believe in Santa Claus, I believe in the tooth fairy, but I don’t believe in you.

This is such a legendary film that I think there are few people out there who have not seen it. It is a powerful and inspiring film, without ever delving into unbelievable clichés. This is perhaps achieved by the juxtaposition of setting the story in a place with no hope: a prison. Unexpected themes of friendship and perseverance are interwoven into the story as well, exemplified particularly by the close bond formed between Red and the film’s protagonist Andy DuFresne. These roles are brilliantly portrayed by Morgan Freeman and Tim Robbins, with Freeman narrating the film in that unforgettable voice of his. Although the prisoners are set up as protagonists, the actions that put them there are never condoned. Furthermore, the film validly points out that just because there are prisoners behind walls, doesn’t mean that all the bad guys have been caught. There is a strong ironic tone throughout the film, which definitively points out society’s hypocritical nature. It is a wonderful script with memorable lines such as “get busy living or get busy dying” and Thomas Newman’s score sets the tone perfectly. The era is subtly but well established with the passage of time marked not only by the make-up used to age the characters, but also by simple iconic signs such as the changing pin-up girls in DuFresne’s cell. This is an incredible story from Stephen King that is a far cry from his usual horror stories.

Misery is another example of Stephen King inserting himself into the story by having his main character as a writer. On the surface, this film is about a writer and his craft; deeper down it is about obsession. Kathy Bates delivers an exemplary performance as Paul Sheldon’s (James Caan) “#1 Fan” Annie. This is not an outright horror with constant blood and gore, but rather a tense psychological horror, more terrifying than demons and ghouls due to its plausibility. Sheldon’s captivity makes for many scenes fraught with tension as he searches for an escape or a weapon to defend himself. This tension is heightened by his physical helplessness. There is a great note of sarcasm throughout the film, delivered mostly by Caan, and delightfully rebuffed by Bates. This film is dominated by its two leads, who work well together, and the drama of their situation is well-crafted by Rob Reiner.

This film is beautiful and effective in its simplicity. The film starts in cold greys and blues as Bobby mourns the loss of his childhood friends. The story unfolds to a warmer tone as we journey back to Bobby’s childhood and happy times with his friends. A mysterious old man moves in upstairs and a friendship is soon forged. Thus, a strong theme of friendship is established just as in It and The Shawshank Redemption. Despite the warm glow of the past, the turn to the past serves to establish the themes of memory and melancholy. Mychael Danna’s piano score sets this melancholic tone well. A mystical element is added by Anthony Hopkins’ character (Ted Brautigan). As always, Hopkins delivers a superb and refined performance with the child actors perfectly cast. This is another deviation from horror for King, but the supernatural hint is not new with this element also cropping up in works such as The Green Mile.