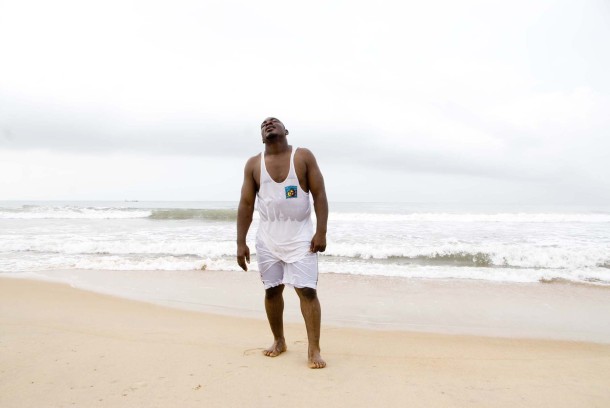 This is the story of a misguided man. A man who chose to change the course of his life so that he could be set on the right path. A path of redemption and a path of hope. Joshua Milton Blahyi, or General Butt Naked as he was more famously known, has a rampant history of blood and terror, of violent years submitting to brutal customs of human sacrifice and cannibalism, entailing the slaughter of 20 000 people, many of them children. Growing up in Liberia as a child soldier, his way of life saw him become a powerful tribal priest, eventually recruiting other young boys to follow in his destructive path – until one day he was hit full force with the revelation of his atrocities. He knew then that he had to change course. Remorse and redemption have turned the general to salvation through Christ. Joshua now travels extensively as an evangelist, preaching the word of his Saviour.

Joshua’s presence is almost surreal. He remains still for just a heartbeat before answering any question and then looks straight at me without ever breaking eye contact. He is on a new journey, but the path is still strewn with the sorrow of the past. “Sometimes I’m walking and thinking someone is going to shoot me. If I go into a public place and just one person knows me, the whole environment changes. The way they look at me, I wish the ground would open up and swallow me.” However, he remains a man buoyed by determination, striving to spread his story in the hope of saving others from themselves, as he once was. When he talks to those still embroiled in the clutches of war, terror and cruel rituals he tells them “I know what you are doing and I know you are suffering, but there is hope for you if ever you want help.”

The hope he carries is like a mantle with which he hopes to enshroud others, that they may change their course too. The differences between his current and former life are vast and his positive attitude have propelled change, evident in a life led serving Christ and in his role as both husband and father. “We met in church,” he recalls, when reflecting of the time he met his wife, Josie. “She was so afraid of me. When she knew I was in church, she went to the back when I was in front. Then one day when she was going home, I stopped the car and offered her a lift, but she said she was not going the same way. Then I came behind a bus and saw her again and said ‘you said you were not coming this way’ and she ran. But then she had a revelation that the Lord wanted to marry us.” Joshua and Josie now have four children, all of whom are aware of their father’s past. “God used my wife to help them understand. She told the story as a cartoon, of General Butt Naked killing innocent people and then Jesus came and died for him.” Josie then revealed to the children that the main character in this cartoon, the notorious General Butt Naked, was their father. “It was hard for some time,” he acknowledges, “but the way she told them helped them get over it. When I play with them, I remember the other children I killed and it is hard.”

The bloody crimes and relentless body count led to him being dubbed “the most evil man in the world”. Continually striving to overcome his past, how does this title affect him now? “It hurts me. Sometimes my flesh wants to argue. What about Bin Laden? What about Hitler? But the people who said it are in my world, not in that world.” This title was ascribed to a man whose carnage was committed within the past few decades, in our lifetime. What distinguishes him from others who could have borne that title is his transformation. Towards those who doubt him, he displays no anger or frustration. “I will tell them they have every right to doubt me, but they should not doubt the saving grace of Jesus.”

He has revisited victims of his past and the families and loved ones of those he has hurt or killed and asked for their forgiveness. Many have given it to him. He has furthered his attempts to make amends for the past, by committing his life to his faith and his ministry, End Time Train Evangelistic Ministries. Having been granted amnesty by the Liberian TRC he sees his newfound freedom as a sign to carry out a mission of faith and hope. “The four corners of the earth would become my evangelistic field,” he proclaims in his book, The Redemption of an African Warlord, a compendium of his past, as well as his redemption.

This is a man who bears a terrible burden; one who deals with criticism, doubt and animosity on a daily basis. His life is atypical and not easy to comprehend, but perhaps this is not something we are meant to understand or even judge. The most we can do is take a message from it, a message which Joshua himself is trying to convey. “I regret what my past was,” he says; but he knows that there is hope. “There is hope, no matter how far you go.”