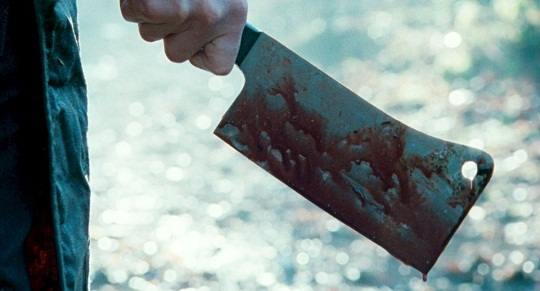 The title is a dead give-away that this is a schlock horror with a plot that contains mores holes than any of its massacred victims. In the 90s, the success of Scream was followed by an onslaught of similar attempts, most of which failed. This is yet another slasher film that harks back to that time and is one of the worst instances of young people buying the farm. It plays on every single stereotype: the dark, creepy woods; an eerie warning early in the film and the isolated cottage in the woods. Needless to say, the characters break every single horror-movie rule, such as disobeying the policeman’s orders not to walk in the woods after dark and opening a door when alone in the house and yelling “Is anyone there?”

Cabin? Woods? Middle of nowhere? This already sounds like something you’ve seen before. As it often does the story follows a young couple, Paige and Calvin, who leave for their holiday cottage in the woods with Calvin’s dim-witted sister Mandy to get out of the city for the weekend. Mandy puts a real damper on things by bringing along her unpleasant one-night stand. Upon their arrival at the cottage, the local policeman warns them, quite casually and jovially, about a serial killer on the loose known as the “tree surgeon” who kills and cuts up his victims and then strings the severed limbs up in trees. Instead of packing up their bags and heading home, as any sensible person would, everyone shrugs off the fact that a demented murderer is on the loose and immediately we know where this is headed. Of course, if they did go home, there would be no film.

It could have been the kind of horror that is so bad it’s funny, were most of the characters not so unpleasant and incredibly stupid. A lot of senseless screaming is usually the order of the day, but the actors try to put on emotionally dramatic performances which, given their ability, pathetic characterisation and feeble plot, they don’t pull off.

The inevitable murders are gruesome, but there is no suspense whatsoever, and only a few daft attempts at cheap thrills, that you will not be scared at all and are really quite happy to see the characters offed as anyone with at least half a brain would have seen the danger coming a mile away.