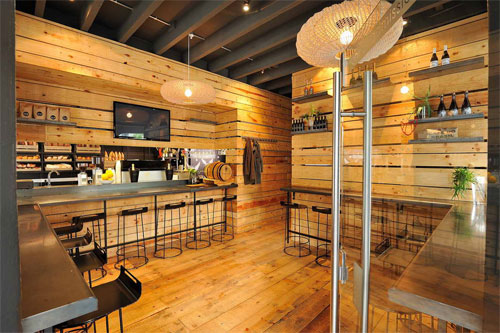 Today may be Friday the 13th, but I am not going to tell you about Jason Voorhees and the bad luck he brings, but rather about Jason Lilley and his awesome bakery on Bree. Last night I was craving pizza, so I trawled the net for the perfect spot where I could indulge myself.

What instantly drew me to Jason’s Bakery was the handwritten menu posted on Twitter and it was the best decision I could have made. Nestled on Bree Street (on the corner opposite my favourite DVD store), I had been there once before for breakfast and have wanted to return ever since. Upon discovering that they were offering pizza, I knew I had to go.

As soon as I arrived whom should I meet upon sitting down, but Jason himself. Now when it comes to my areas of expertise I do not like asking other people’s opinions, but as I am still a fledgling foodie I will eagerly ask the chef or waiter, and definitely the owner, when it comes to food. I think this is particularly important, even if you are already a food fundi, because even if you know everything about food you cannot know what the people behind the scenes know – just as you cannot interpret poetry and claim your ideas are accurate.

To my delight, Jason ended up recommending the pizza I had been eyeing anyway…the Pedro: water buffalo chili con carne with buffalo ricotta, jalapeños, egg and coriander. Now I also find it imperative to match the perfect drink to my food; Jason recommended beer. Oh yes, that I had heard before and the combination is so classic that I was sorely tempted but I really hate beer, so he recommended a cider instead; but not your standard run-of-the-mill stuff; he gave me Everson’s Pear Cider.

Now first and foremost your pizza is served on a wooden board with no knife and fork: telling you to eat your pizza properly and not like a little bitch. They also give you REAL salt and pepper in little petri dishes, none of that suspicious powdery stuff that clogs up and attracts ants. At first the cider didn’t work so well for me, but once the jalapeños bite you’re sold on the cider and it hits you right on the mark.

I love a place that constantly changes its menu and not only does Jason’s only do pizzas on Thursdays, but they chop and change the toppings every week. This is the way pizza should be made; this is the way food should be made! It is an art that affords so much opportunity for creativity and experimentation and it is satisfying (and mouth-watering) to find places that take this risk.

What sold me even further was the excellent music. I often find my ears cruelly assaulted in restaurants, particularly in Cape Town, that the brilliant tracks playing at Jason’s instantly put me at ease. I am ready to go right back and can’t wait for my brother to visit Cape Town, because we are definitely hitting this spot and at least I know he’ll be able to pair a fantastic pizza with a great beer – the way it should be done.

Follow an awesome pizza with the following movies (and TV series):

– Napoleon Dynamite (because I had the Pedro pizza)
– Mystic Pizza
– Two Guys, A Girl and a Pizza Place (for some old school Ryan Reynolds)