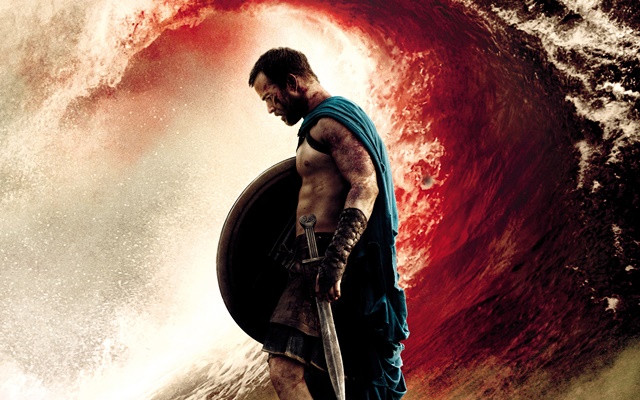 Based on Frank Miller’s latest graphic novel Xerxes, and running parallel to the events in the first film, 300: Rise of an Empire tells the story from the point of view of the Athenians, culminating in the Battle of Salamis. Persia is still the antagonistic force, but depth is provided to the characters on the opposing side – even for the “god-king” Xerxes. This makes some reparation for the vilification that was so glaring in the first, drawing inevitable comparisons to strained relations between the US and Middle East in recent years to the point that the film was banned in Iran.

Many of the same themes are highlighted, albeit with a shift in focus towards brotherhood in combat. This portrayal is brought across most strongly in words, delivered by Themistocles, the general trying to unite all of Greece. Despite this focus, the camaraderie of the men is lacking, and was stronger in the previous film. The father/son theme is also re-introduced, but feels forced and extraneous. Despite a lot of the supporting characters feeling superfluous, the cast does a fine job – especially considering the return to the challenge of green screen work that the film employs.

As much as digital cinema has advanced, and offered us a plethora of visually remarkable films in this medium, it still has a long way to go in losing its veneer of superficiality. That being said, it does serve to stylise the film. This is often the intent with films such as this, which – although portraying historical events – stretch dramatic license to its limits. Lending a hand to the grandeur and brutal spectacle is a majestic and sweeping score varying from the first, which was interspersed with harder, modern tracks to heighten its style – effectively serving the action, whereas the music here serves emotion.

The passion of battle and command is delivered in a fine performance by Australian actor Sullivan Stapleton, as Themistocles (where would comic book/graphic novel adaptations be without the Aussies). Amidst the tumult and turmoil of burning cities and violent seas, he grounds the film. Lena Headey returns as Queen Gorgo. To her credit, she does such a good job in Game of Thrones that it is difficult to dissociate her from Cersei. But, although both characters are stubborn and proud, the malice of Cersei is not present and Queen Gorgo is beautifully resurrected and given a chance to shine.

The pinnacle of the entire film is Artemisia, commander of the Persian navy, played with just the right amount of intensity by Eva Green. She is a rich and powerful character not only because, through her and Xerxes, gender roles are subverted, but also because – whether implicitly or inadvertently – she is the wisest and truest character. She lays bare the ugly truth of war, however briefly, while remaining true to herself and fighting to the end for what she believes in.

Although we should be wary of historical inaccuracy, punted ideology and bias, it’s not really that heavy and delivers on every front as entertainment. This is not Sparta, but is worthy of its predecessor. The action is fantastic on an epic scale, breasts are bared, men with six packs shout a lot, people die spectacularly, the beasts (keep a look out for the awesome, new ones) are magnificent and the front kick returns, delivering a blow as great as the film.