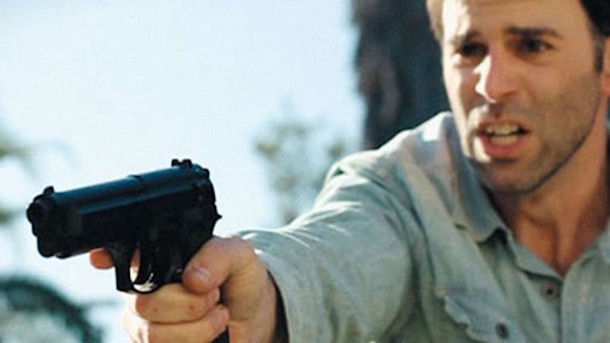 It starts off slowly with the introduction of the mundane Vincent, whose visiting uncle prompts him into spicing up his dull, white-collar life by setting up a forbidden rendezvous with a steamy waitress. The consequences of this attempted affair are baffling and unexpected. The end of this segment is the film’s departure point for a leap into the surreal. Temporarily grounded by the introduction of Chris and his quadriplegic girlfriend Wendy, it too quickly leaps into the chasm of weirdness. The third and final segment, centred around struggling actor Jake Tanner (this is LA, after all), brings the characters and plot points together. Two great cameos, in the form of William Forsythe and Malcolm McDowell, serve to personify the sleaziness of the film’s dark world.

Despite its spiralling descent into grimy surrealism, continually emphasised by split screens and shaky, hand-held shots, the film’s episodic nature gives it structure and weaves the plot together. As is indicative in the title, the film is an indicting hate letter to Los Angeles from director Yvan Gauthier; while, in terms of style and tone, it appears to be a love letter to filmmakers David Lynch and Brian de Palma. Gauthier’s latter desire takes over and ends up letting him down as his paradoxically surreal realism is firmly established, within an intriguing plot which actually makes sense, only to be up-ended by a silly conclusion.