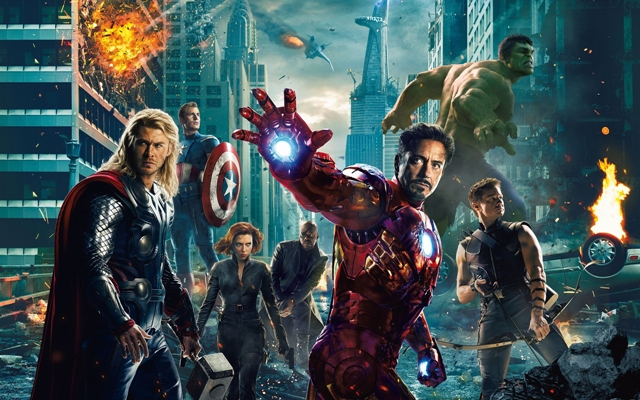 Joss Whedon was certainly the right man for the job when it came to finding a director for The Avengers. The result of his handiwork is one of sheer entertainment. His delightful tongue-in-cheek wit and well-placed one-liners that he gleaned to perfection on Buffy in the late 90s is perfectly suited to the tone of the film and works excellently.

A stunning cast has been sought and, for the most part, presented in their own stand-alone flicks. Now a new evil lurks on Earth and the heroes have been brought together, along with new characters and some other support that has been glimpsed already. Finally Iron Man, Thor, Captain America, Nick Fury, Black Widow and Agent Phil Coulson return and unite along with a new Hulk for this epic get-together.

The tension between the egos is inevitable, but delightfully funny and naturally allows for eye-popping action and excellent throw-away lines. Scarlet Johansson makes another fantastic turn as the tough, no-nonsense yet gorgeous Black Widow, making sure that at least not all the women are represented in a state of distress or dimness.

Although the main heroes all generally receive the same amount of screen-time and hero prowess, Robert Downey Jr – as the biggest star (bar Samuel L. Jackson) and coming from the highest-grossing films of the lot – is given the honour of being the biggest hero with the biggest heart (irony very much intended), despite having the biggest ego. His performance is so slick and smooth, that not only is he forgiven, he deserves it.

As always, I love the “fish out of water” scenario and Captain America (coming from the 1940s) and Thor (coming from anther world) slot into this plotline. It may not be new or original, but it is fun and provides the characters with a lot of their humour. Jeremy Renner impresses yet again with his excellent introduction as Hawkeye.

Yes, it is all a lot of money-making and pretty faces and bodies and popcorn-chomping action; but it does not pretend to be anything else. It is unpretentious fun and humour that sees the makers having a blast and inviting you along for the ride.