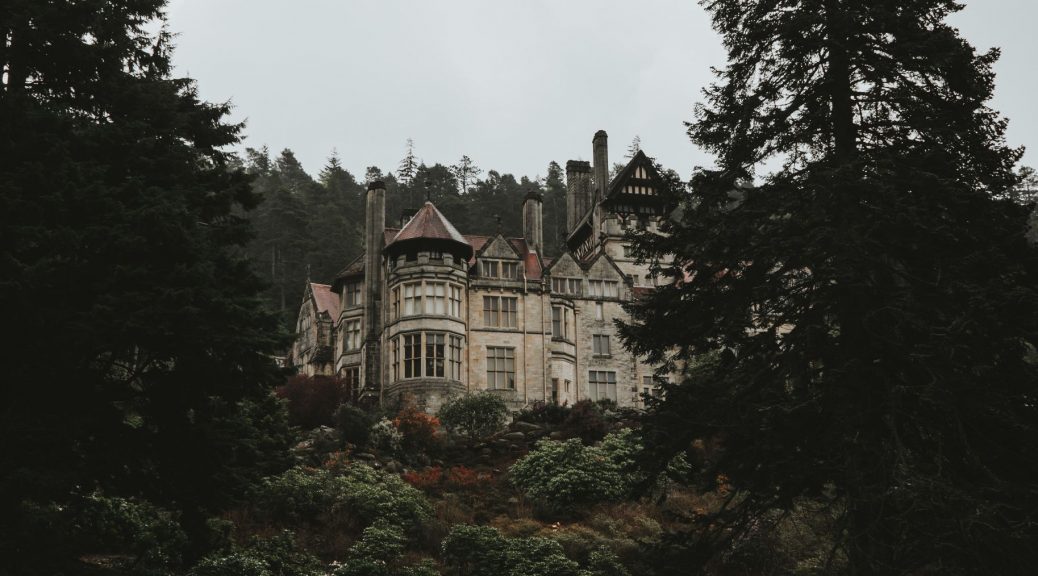 October arrived with thunder and rain, perfectly setting the tone for the month of Halloween. A month filled once more with tales of terror, horror, death, and dread. I had a long list of spooky stories to read and even picked up a few secondhand books that perfectly suited the theme.

Rosemary’s Baby by Ira Levin
When I watched the film adaptation of Rosemary’s Baby, I was not a massive fan. It was some time since I’d watched the movie, but I remembered enough to realise that the adaptation was very faithful to the book. Given that I hadn’t loved the movie, you’d think I wouldn’t love the book, but I was completely engrossed. I breezed through it. If I had the luxury of time, I could have read it in one sitting. Although I remember enough of the movie to realise how faithful the adaptation is, I don’t remember enough to pinpoint what made me dislike the movie and love the book. If I had to hazard a guess based on my recent reading, I’d say it’s that the book really gets into Rosemary’s head and shows the story from her perspective in a way that I don’t remember the movie doing. Maybe it’s time for another viewing, but I’d much rather spend it reading another of Levin’s books.

Young Goodman Brown by Nathaniel Hawthorne
As short as it is bleak, this quick story kept things in the realm of Rosemary’s Baby with witches and the devil popping in for featured cameos. Not much happens beyond the temptation of the title character and the revelation that all humanity is evil. On the worst of days, that’s not so much a revelation as it is an obvious fact.

Audition by Ryu Murakami
When I worked at a video store (which was slowly but surely becoming a DVD store), I remember this movie hitting the shelves and becoming a popular rental. I wish I’d taken the opportunity to watch it, but when you watch Asian horrors and thrillers, you need to take a breather before diving into the next one, because they are horrific and thrilling in a way that makes Hollywood horror feel like bubblegum pop. I was just as engrossed with Audition as I was with Rosemary’s Baby. The characters are so well-written, and the slow burn build up to the insane climax so well-wrought, I was sad to see the story end as much as I was relieved that the awful torture of its ending was over.

The Little Broomstick by Mary Stewart
After the intensity of the past few books and all the bad witches, I needed something lighter and lovelier with some good witches for a change. Again, I’d seen the movie adaptation first, the Japanese animation, Mary and the Witch’s Flower – which in this case, I loved. Charming and enchanting, the movie matches the tone of the book faithfully, along with the story. However, the witches, although not as evil as the others featured in this list, are not wholly good either, so I didn’t quite get the good witch tale I was after.

Death Going Down by María Angélica Bosco
With the author described as an Argentinian Agatha Christie, this book was a must for me, because, as I’ve said time and again, I love murder mystery. This was an entertaining read with plenty of eccentric characters keeping me invested, but ultimately pretty forgettable. Quite literally: I can’t even remember who the killer was!

The Haunting of Hill House by Shirley Jackson
Gothic horror may just be a new favourite genre of mine. Masterful and compelling, the atmosphere that Jackson builds in her horror masterpiece is filled with melancholy and dread. I was completely absorbed by the characters, rivetted by the suspense, and racing towards an ending far bleaker and ambiguous than the series adaptation of three years ago.

Like others on this list, I’d watched the adaptation first. Par for the course, the book is better; yet the adaptation is still a gem in its own right, particularly for the change it offers through the rewriting of the main characters: in the book they are strangers, in the series they’re family members, merging what is the book’s back story directly into their lives. It’s a difference that completely changes the dynamics of the characters’ relationships and motivations, allowing the series to stand on its own. What remains faithful to Jackson’s work is the antagonism she elicited by making the house as much of a character as any of the complicated characters that inhabit it.

The Plague by Albert Camus
This is not a horror in the traditional or supernatural sense, but I wanted to include real-world horror in my October reading list. This would either come from a world riddled by an infectious disease or an environmental catastrophe, which is how I came to read The Plague. It rings eerily familiar at almost every word and will make you marvel yet again at how the world failed to contain Covid-19. Practically everything is completely relatable. The differences lie in the range of the book’s plague, because it is confined to Oran and doesn’t spread across the world (making it an epidemic and not a pandemic). And since it’s set in the 1940s, people are almost completely unable to communicate with loved ones outside the walls of Oran. There’s also no social distancing, which I found odd. But people wear masks, lose jobs, hike prices, and sell contraband, while hospitals run out of space and equipment, with staff overworked and exhausted. However, it’s not all doom and gloom that’s too close for comfort. It also offers notes of hope, solace, and humanity through its characters and its conclusion.

Endless Night by Agatha Christie
Murder mystery had already been ticked off for October in Bosco’s book, but I couldn’t let the month go by without a dose of Christie. And I loved this book. Driven by a gypsy’s curse and a house possibly haunted, it was perfect for Halloween. I really thought I had the mystery figured out, just to have the rug pulled out from under me yet again!

Flight of a Witch by Ellis Peters
The title of this book is so misleading, as is the blurb at the back which hints at witchcraft. Besides a throwaway mention of witchy fables and folklore that helps set a gloomy mood in the Welsh countryside, this is a solid murder mystery, even featuring a recurring detective. The fact that it’s part of a series should have been a giveaway that this was more murder mystery than spooky supernatural, but Christie often wove witches and curses (see above) and other elements of the supernatural into her stories, so I wasn’t too far off in expecting more from the title. Nevertheless, I enjoyed it immensely. Peters’ writing becomes a bit bogged down in overcomplicated description at times, but her characters are colourful and compelling and impelled by plenty of mystery and suspense, as well as enough action (and twists) to pull it out of its boggier paragraphs. I’d definitely investigate another Inspector George Felse adventure.