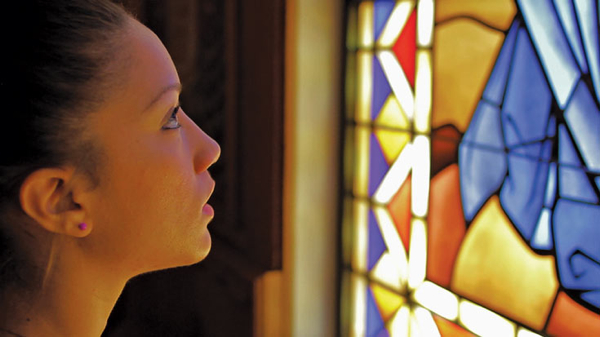 Maria My Love is a film as quiet and contemplative as its main character, Ana, who is dealing with the loss of her mother. She is uplifted by new relationships: one with a young man, who becomes somewhat of a guardian angel; and the other with her half-sister, with whom she chooses to reconnect. However, Ana still remains resentful of the mistakes her father has made with regards to her mother and this, along with the lingering devastation of her loss, continues to bog her down.

Ana’s demeanour and situation may be bleak, but there are others trying to instil hope back into her life and this is beautifully conceptualised through the California spring. The film bursts with colour, ranging from gorgeous shots of fresh fruit to bright flowers, the latter theme cropping up throughout the film, pointing to the renewed life which Ana seeks. Everything about the film, from the way it has been shot to the actors’ performances, is both natural and raw and there is never any attempt to gloss over the characters or sugar-coat any of their circumstances, making the film’s impact far more profound.

Despite Ana’s often dismal countenance, the script does not allow her to wallow in self-pity. Instead Ana seeks to enter a mentorship programme in order to help someone else in need. When she is rejected it makes her even gloomier, but she is quickly pulled out of this reverie by her impulsive decision to help a stranger, who happens to share her mother’s name, Maria. The latter character, portrayed by Karen Black, is too snippy, too often. She has some warm moments, but it would have helped to have a few more.

The film is based on the life of Lauren Fales (who plays Ana’s sister). It is a poignant tale of loss, rejection and finding oneself and the personal touch, as well as the way it has been shot, rid it of the attendant clichés which usually accompany a drama such as this.