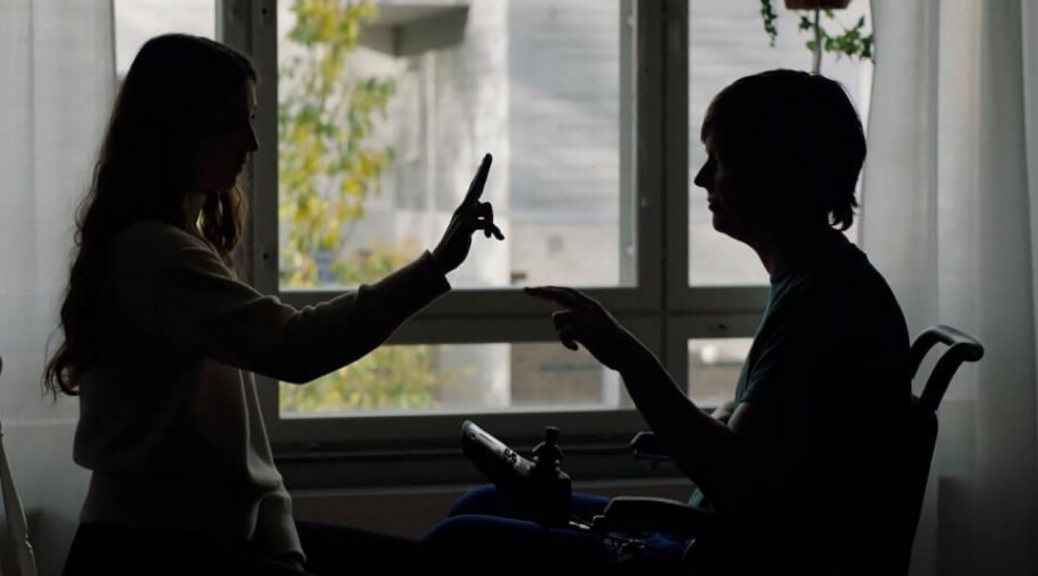 Short stories are a format I’ve been reading increasingly more of. With the Swedish film Alive, written and directed by Jimmy Olsson, I feel I ought to take this format to my passion for movies more often as well. Alive runs for just 23 minutes and the film’s synopsis tells you practically the whole story. Yet it still takes you by surprise, and it is the characters that truly keep you invested. Alive’s central figures are two young women – Viktoria and Ida – who alternately play to and against type in a way that lets the audience explore their own prejudices.

Madeleine Martin and Eva Johansson, the actresses playing Viktoria and Ida, imbue their characters with warmth, intensity, and humour as they complement and contrast one another. These contrasts are depicted not only through their relationship, but through their lives – lived together yet separately; one mobile, the other not.

Viktoria is differently abled and in a wheelchair, with Ida’s roles switching between caregiver, companion, and friend. Ida initially seems like someone Viktoria can trust not to treat her differently, their friendship looking like any other. In many ways this is exactly what Viktoria wants and needs from Ida. But at times, Ida can’t help feeling the pity Viktoria clearly wants none of.

Viktoria, at first, in her seeming sullenness appears like she may be relegated to the angry, depressed stereotype that filmmakers and storytellers seem so fond of employing when depicting those who are differently abled. But the portrait of Viktoria, like that of Ida, is soon both subverted and deepened.

In a short space of time the two women weave seamlessly through the cycles of female companionship – from shared confidences to giggled confessions, and even to latent rivalry. Music is used sparingly to really give the words space to breathe, allowing sharp focus on the characters – two young women ultimately yearning, and deserving, of the same thing – and acknowledging that they want it in different ways.

This desire is expressed in the film’s title, while the difference in what it means to each of us to be alive is depicted in the constant sway between Viktoria’s firm intent and Ida’s uncertainties, bound together by their shared frustrations. With these two women, the film addresses the expectations we place on ourselves and on others, not only through our relationships, but also through the added complications that stereotypes place on those expectations.

Alive was due to be screened at the Cleveland Film Festival, which has moved online due to Covd-19.
Watch the trailer for the film here.