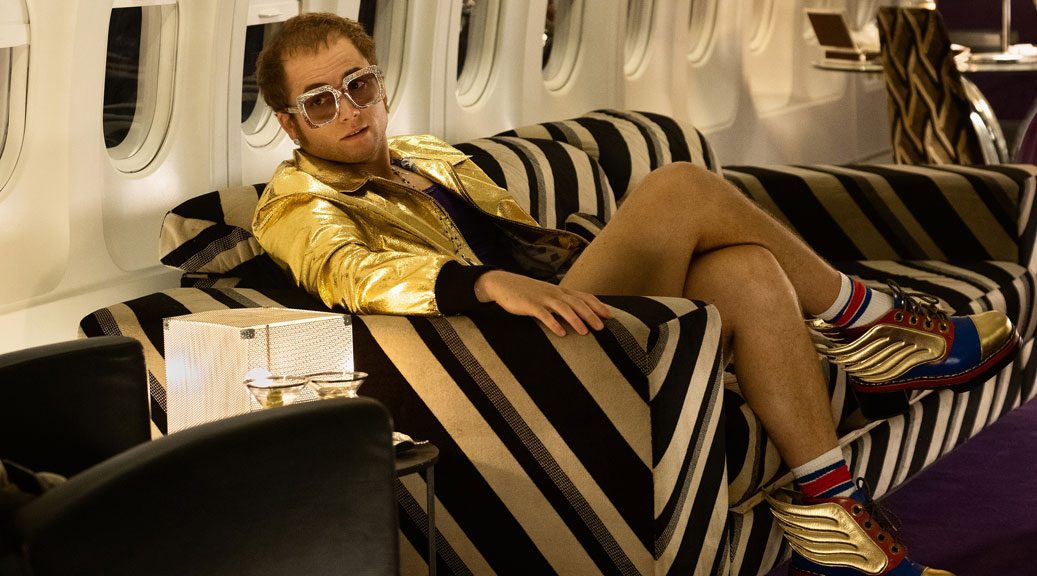 This movie’s gift is its song, which director Dexter Fletcher and his incredible cast use to tell the story of musician Elton John. In many ways, Rocketman follows the formula of a standard music biopic; but by embracing John’s music and spirit through the medium of a full-on musical this movie is heightened in style, tone, and emotional depth. While the movie does replicate various of John’s famous concerts and performances, the rest is a full-bodied song and dance that allows the story and its characters to shine.

It’s a method that should be employed more often when it comes to music biopics. By tapping into the creative potential of the filmmakers and actors, a biopic such as this allows a more authentic representation of the artist and a fuller and more diverse exploration of the genre.

Taron Egerton, as Elton John, explores the music, the character and the heartache with brilliant results. The movie is framed and interspersed by John attending an AA-style meeting: another touch that moves the film away from the tiring linear frame of a standard biopic.

Whether we see Egerton at this meeting slumped forlornly and waxing morose or taking to the stage in many and more gorgeous costumes and gigantic specs, the actor’s performance is 100% committed, imbued with verve, passion, and hurt. Egerton does all his own singing, and although there is certainly a strong sense of John’s sound, the actor and director do not strain to replicate the singer’s sound for the sake of familiarity.

Almost anyone would recognise song after song, and at times you are swept away by sentimentality. I even heard the ladies next to me whisper “do you remember this?” This nostalgia is a popular feature of film currently, and in Rocketman it does provide the audience an emotional connection.

But it does not rely solely on this ploy to draw in its audience. It celebrates the professional glory of John’s career, yes; but at the same time, the emotional guts of John’s heartache are on display. Amidst a colourful cocktail of sex, drugs, and rock ‘n’ roll, the cast ground the film with a script that unveils John’s wilder proclivities without demonising him or his nature.

This cast is rounded out by a remarkable cabal of actors. Jamie Bell brings a quiet warmth to the movie as John’s constant friend and collaborator, Bernie Taupin, while I barely recognised Bryce Dallas Howard as John’s mother. The standout from the supporting cast, however, took me by surprise. It comes in the form of Richard Madden.

I would like to momentarily meander on a tangent to touch on an admittedly tired discussion: Madden as a strong contender for the next James Bond. His presence when he stepped on screen made me catch my breath in a way actors seldom do. That’s Bond, right there. Tangent aside, Madden does an incredible job as smarmy manager John Reid, matching Egerton’s fierce passion every step of the way.

It’s a movie very much driven by its passion, deepened by it heartache and heightened by its easy foray into the fantastic. By allowing the actors and the film’s medium to explore and create, it stays true to the spirit and inspiration of John’s creative soul.

Rocketman is in cinemas nationwide from 7 June.
Image courtesy of UIP South Africa.