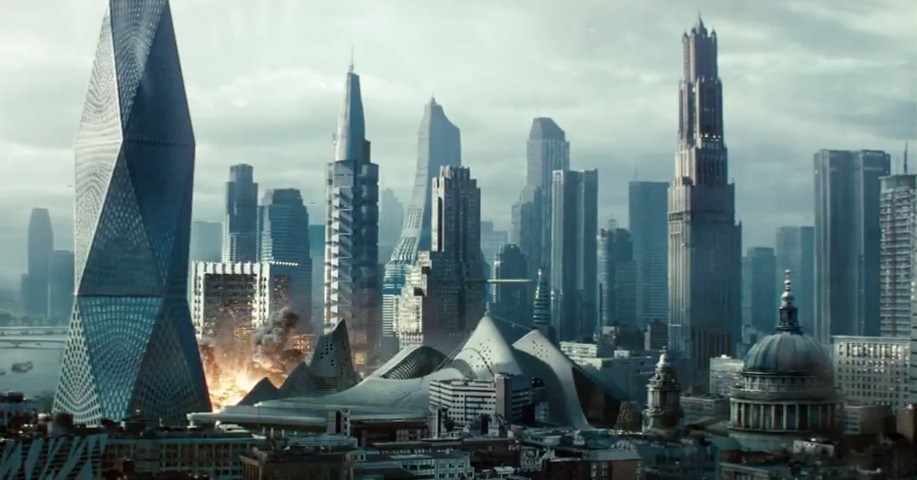 Admittedly I am not a Trekkie, so I cannot speak with much authority on how Star Trek Into Darkness, the latest addition to the canon, holds up against the original series, spin-offs and numerous films. This brings me to one of the film’s strong points: it stands on its own. You need have no prior knowledge of Star Trek, its characters or its universe to enjoy it. The film does not assume that everyone in the audience is already familiar with its world and it never condescends or bemuses those who are new to the franchise.

Into Darkness delivers on many levels and fits into the catalogue of Hollywood epics with its gigantic set-pieces, sweeping score and big emotions. Shamefully, I haven’t even seen this film’s predecessor, Star Trek (2009), but as this one stands so well on its own I am fully able to reflect on the impact of the new arrival.

Having helmed Star Trek, J.J. Abrams is back in the captain’s seat for the sequel to his prequel. Along with the likes of Christopher Nolan, the ambitious Abrams is guaranteeing the future of Hollywood cinema; so we can rest assured that when George Lucas and Steven Spielberg retire for good, they will have left their legacy of action and adventure in capable hands. Much like Spielberg, Abrams has a faithful team in tow, including writer/producer Damon Lindelof and composer Michael Giacchino. The latter’s score thankfully deviates from the disturbing crescendo of high-pitched sound which marked those eerie moments of tension in Lost, which practically every composer has been trying to emulate since.

The cast is a bit of a hit and miss. Chris Pine does a good job as a doe-eyed yet determined Captain Kirk, supported by a great performance from Zachary Quinto. With Spock he adds to a versatile repertoire, which has seen him playing a superpowered villain, as well as a gay ghost. I am not a fan of Zoë Saldana and seeing her deliver another mediocre performance reminded me why. Karl Urban’s performance is a bit disappointing, but as an actor more suited to playing stern and commanding roles, this mishap can be put down to miscasting. Simon Pegg, although having proven himself as a lead man, is an actor well aware of his strengths and as the comic relief delivers yet again. He adopts a Scottish accent, which is a delightful change and helps differentiate his Scotty from a similar character he plays in Mission Impossible. As the mysterious Khan, Benedict Cumberbatch is superb; but the highlights are the smaller parts played by Peter Weller and Leonard Nimoy. I may not know much about Star Trek, but pop culture has at least taught me who Nimoy is.

The script is perhaps not the most original or compelling and Nimoy’s appearance is one of a few redundant story aspects. It is the astonishing vision of the future which will capture you and it is this world and its surrounding universe which are the film’s coup d’etat. The production design, special effects and immersive 3-D will enthral you right from the explosive beginning. As mentioned, I am not a Trekkie and was under the impression that, like Star Wars, it consists of a made-up world. Although the universe is embellished with new planets, aliens and foreign languages, its futuristic rendering of Earth makes it more sci-fi than Star Wars and thus serves to further distinguish the two franchises. Knowing nothing about Trekkies I cannot say how they will respond to the film, but one thing is certain: it has definitely whet my appetite to discover more.