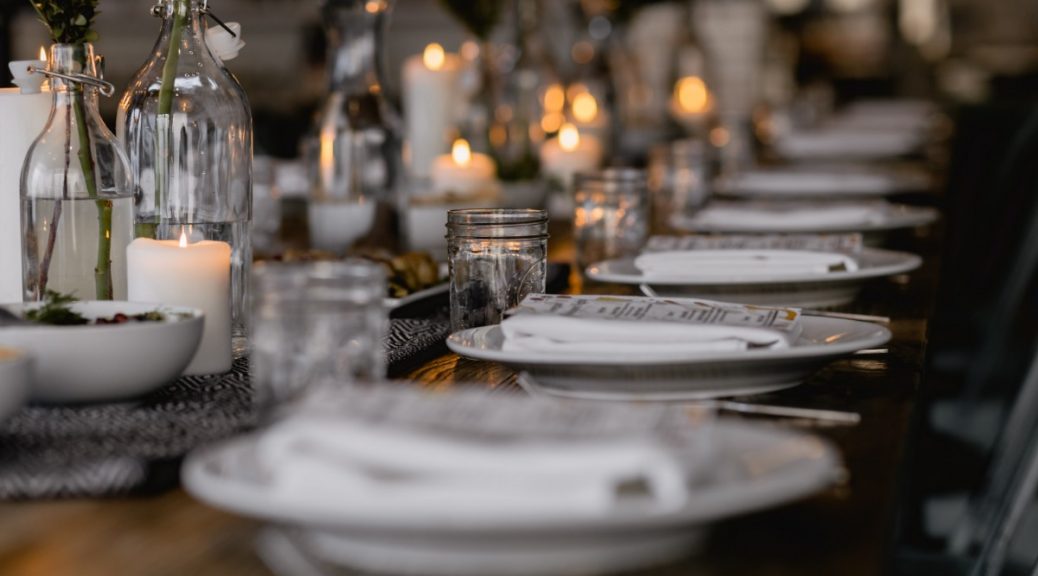 The knob on the stove that turned on the gas needed a special twist and turn before the fire leapt to life. Abbi knew it was a hazard, but it gave her a sense of ownership over the kitchen. An ownership that kept George and his misguided culinary mishaps to a necessary minimum. Everything she needed for her dinner party was ready, except the dessert – poached pears with honeyed white wine. At the same time, she’d quickly blitz up her famous jalapeño dip to serve with the hors d’oeuvres beforehand. Everyone excepted everything at these regular dinner parties: from an elaborate main course bookended by aperitifs, appetisers, soups, salads, dessert, coffee, cheese, and digestifs to the best wine and latest, trendy cocktails. More was more seemed to be the goal.

“What’s for dinner?” George asked with hungry enthusiasm, as he appeared in the kitchen after his earlier banishment. “Never mind what we’re eating. Rather worry what we’re eating from.” George understood that as his signal to set the table and as she heard the clanking of plates and clinking of cutlery from the dining room, Abbi returned to her food and her thoughts.

With a gasp she banged a pot onto the stove, almost forgetting about it in her distracted thoughts and even more distracting interruptions. There’d be lots to say if she forgot dessert or burnt dessert or did almost anything else to it, besides make it perfect. Abbi rolled her eyes as she anticipated the inevitable remarks that would surface over the course of the evening. Like the evening’s courses. What had been included, what had been left out and, most pressingly, why. Not to mention the inevitable barbs about her choice to plan a dinner of the plant-based variety.

When it came to these dinner parties, everyone had free reign with the menu. Allergies and religious reasons were of course taken into account. But everything else was a free-for-all. Besides, with a group where no one was strictly vegan or vegetarian; where there was only one allergy; and, despite the mix of religions, no eating rules or regulations that anyone stuck to – you  had free reign and wide choices when it was your turn to host. As a guest, you were allowed to comment on and critique the quality of the cooking or the way it was served and presented – after all your turn would soon come to endure the same. But you weren’t allowed to condemn the choices. You wanted to cook Indian? Bring it on. You wanted to serve seafood. Go ahead. Want to give gourmet burgers a go? It’s your night. But the condemnation came all the same. The dinner party rules, scant as they were, never stopped anyone from providing barbed opinions that poked the bear sleeping inside.

The guests found anything and everything to nit and pick at. Like introducing new or borrowed traditions. Abbi was always seeking ways of incorporating traditions from others and elsewhere. If they were cooking food from foreign and far-flung places, trying new sauces and spices and spirits, why not introduce a novel way of serving or hosting too? Like an open spot for an unexpected visitor or a guest who was no longer there, but should have been. She’d seen something of the sort at a completely unrelated dinner with a completely different set of people. The idea had appealed to her. It was a conversation starter – not that her friends needed it. But it could start a conversation they always avoided – not about absence or death, but remembrance. Reminiscing. Keeping others close and alive through memory.

But it was something her friends avoided – like paper serviettes or plastic wineglasses. Not memory, per se. After all, they loved reminiscing about better days, better times. “Everything was better in the old days,” they liked to exclaim. No one seemed to remember though, that during those “good, old days”, their parents were decrying the present and wishing for their good, old days.

Abbi rolled her eyes as if she were hearing the words right now and in her frustration spooned more jalapeños out of the jar than she’d intended. She shrugged and dumped in the whole, overloaded spoon. Someone was sure to complain about the dip being too hot. Just as someone was bound to moan if she made it milder. “This could use a bit more bite,” she heard Patti saying, while Margot would merely tap her overlong fingernails – a signal either of assent or disagreement. You could never be sure with Margot. She liked to suss out the general feeling so she could be sure to side with the majority – or the minority, if she was in the mood for a fight.

Constructive argumentation, they liked to call it. Abbi’s eyes reached skywards again, and she gave the lemon wedge between her fingers an extra vigorous squeeze into the already zesty dip. “How will we grow if we don’t argue?” Trevor would declare rhetorically. “Discuss,” Rex would correct him. “Discuss is the word you’re looking for.” Abbi turned on the blender, relishing in its white noise, wishing it could drown out the imaginary voices which continued hammering through her head. Grow? Abbi harrumphed so violently, spittle sprinkled into the dip she was now spooning out of the blender. The only thing they were interested in growing was their bank accounts. And then all they wanted to do was perch on their piles of cash, critically surveying those sitting on smaller piles.

The little people in her mind’s eye scattered as the doorbell rang. Abbi hadn’t even had time to fix her hair or remove her slippers. They’d have something to say about that. But it was all par for the course. Like an apron still on, preferably with something schmaltzy emblazoned on it like “kiss the chef”. Or floury fingertips which apparently indicated that you really had made the food from scratch. And a wine bottle in hand so everyone could make jokes about how you were drinking more than adding to your coq au vin? That was the best of all. It was the perfect opener into an evening filled with barely-veiled sarcasm and ambiguous declarations.

Abbi walked out the kitchen and stopped by the front door, taking a deep breath. She plastered a smile on her face. A smile that fell the moment she opened the door. “Abbi,” called out Patti, with a smile on her face just as glued on as Abbi’s had been. “How…” she began before Abbi declared, “Dinner’s cancelled.” She slammed the door on Patti’s smile, which was already slipping as she sputtered in confusion. Abbi turned on the heel of her fuzzy, pink slipper and marched to the dining table. With quick, efficient movements she swiped the unnecessary cutlery, dishes, and placemats from the table and shoved them back into their respective drawers and cabinets before seating herself at one of the remaining three places. George entered beaming, the almost comical grin vanishing like the places he’d set just moments ago. His mouth dropped open for the obvious question. Abbi merely looked up, smiled, and said, “I saved you a spot.”