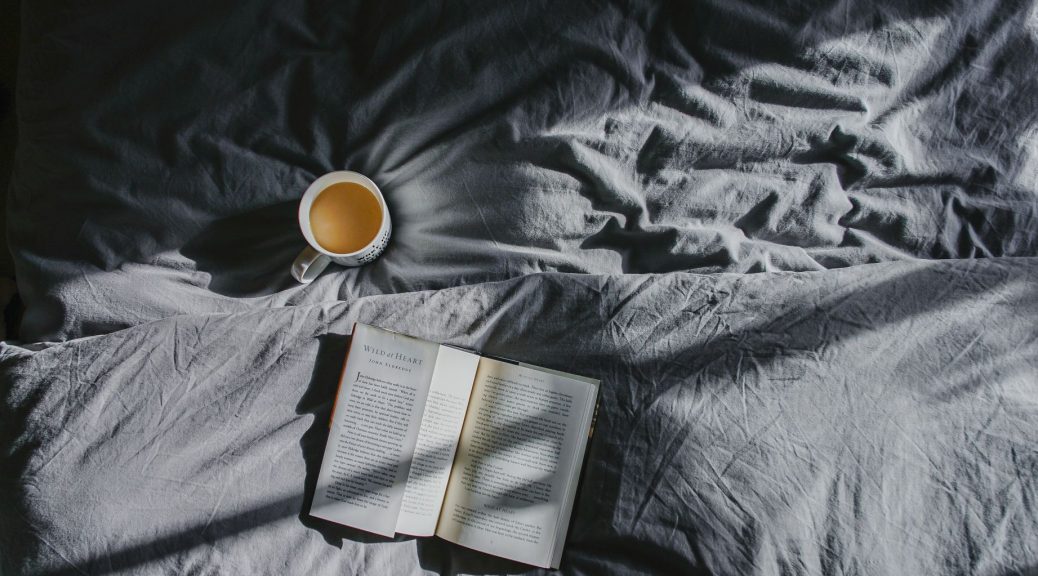 Despite being confined to one place for one whole month (plus five days) of lockdown and taking part in a readathon, I averaged about the same amount of books as usual. Here’s what I read this April.

The Blue Castle by L.M. Montgomery

Growing up, I loved the Anne of Green Gables series by L. M. Montgomery. My mom loved the books too and collected as much of the series as she could. These were the books I read, but a few years ago I downloaded the whole collection on Kindle and reread the ones I’d read before, plus the last few in the series I’d missed. Around this time, thanks to the constant presence of Kindle’s “recommended for you” (which sometimes includes books by authors you’ve read before), I downloaded The Blue Castle. Since I’m working through my TBR piles – those next to my bed, on my shelves, and on my Kindle – I chose to read this stand-alone story by Montgomery. And I absolutely loved it. It has the same whimsical and enchanting descriptions of the Canadian landscape that the Anne series does, as well as a tempestuous heroine at its core.

Ayoade on Top by Richard Ayoade

My first introduction to Ayoade was as the character Moss in the brilliantly funny The IT Crowd. As a writer, he is equally funny but also bitingly brutal. I listened to  Ayoade on Top – his deeply in-depth analytical analysis of the movie View from the Top – on Audible, read by none other than Ayoade himself. While ostensibly a book about a movie, it is really a memoir in disguise. Ayoade weaves his critique of the film – a fluffy, forgettable frivolity from the early noughties – with tales from his own life. If ever there was a right way to do a memoir, this would be it. Memoirs are hardly my favourite format – and I’ve read many in the last few years. The trick to making them memorable – and enjoyable – is delivering them in a wholly unique and unexpected way, and Ayoade has found that way.

My Brilliant Friend by Elena Ferrante

An Italian book set in Naples and Ischia, I’ve been wanting to read My Brilliant Friend for ages – especially after I watched the TV adaptation. It’s an incredible series with stunning performances and scored by my favourite composer, Max Richer. It’s a very faithful adaptation. Many bookworms will tell you that “the book is always better”, and while I tend to agree, there are nevertheless exceptions. This is one of them: as far as My Brilliant Friend is concerned, book and show are on par. I would even admit to leaning towards the show as the superior output.

A few months ago, I started listening to Sweet Valley Diaries, a podcast hosted by Marissa Flaxbart who is re-reading each and every Sweet Valley High book and then hosting an episode about each and every book (super editions included!) It’s a really fun, engaging, and entertaining podcast that takes me tripping down memory lane. Where I can, I reread the book before listening to the episode. Aside from the nostalgic element, I also really enjoy the format of Marissa’s show. She has a different guest for every episode. Each guest has to read the relevant book prior to appearing on the podcast. Once on, they discuss the book, peering at it through a 21st century lens, analyse the cover, talk about boys, the teachers, the town and, most importantly, ask: are you a Jessica or an Elizabeth?

The Holy Sail by Abdulaziz Al-Mahmoud

The 126th book for my challenge to read a book from every country in the world, this novel was my choice for Qatar. The Holy Sail is an exciting story filled with interesting characters and all the right elements for adventure, but the telling of it makes it feel more like a dressed up history book than a solid entry in the historical fiction genre.

Elephants Can Remember by Agatha Christie

Every now and again, I’ll take part in a readathon, in which you dedicate a specified amount of time to reading. Dewey’s Readathon takes place at least twice a year and entails 24 hours of reading. You don’t have to read for the entire time, of course – just as and when you can, engaging with fellow readers online as you do. I finished The Holy Sail and then read this Christie mystery in its entirety during the latest readathon. If I had to rank the Christie books I’ve read so far, this one would land at the bottom. Very unusually for a Christie, I found the mystery predictable, with very obvious clues dropped along the way as to how the whole story would play out. I worked it out almost to a T. The dialogue was surprisingly repetitive, with characters either saying the same thing twice in one sentence or just repeating important plot points time and again. Maybe this is part of what made the mystery so easy to solve, so early on. It feels, however, more like a poor editing job than a lack of imagination on Christie’s part. It’s still a great story, and her characters – in this case, regulars Hercule Poirot and Ariadne Oliver – are as entertaining and endearing as ever.

What did you read while social distancing and what’s on your TBR list for May?