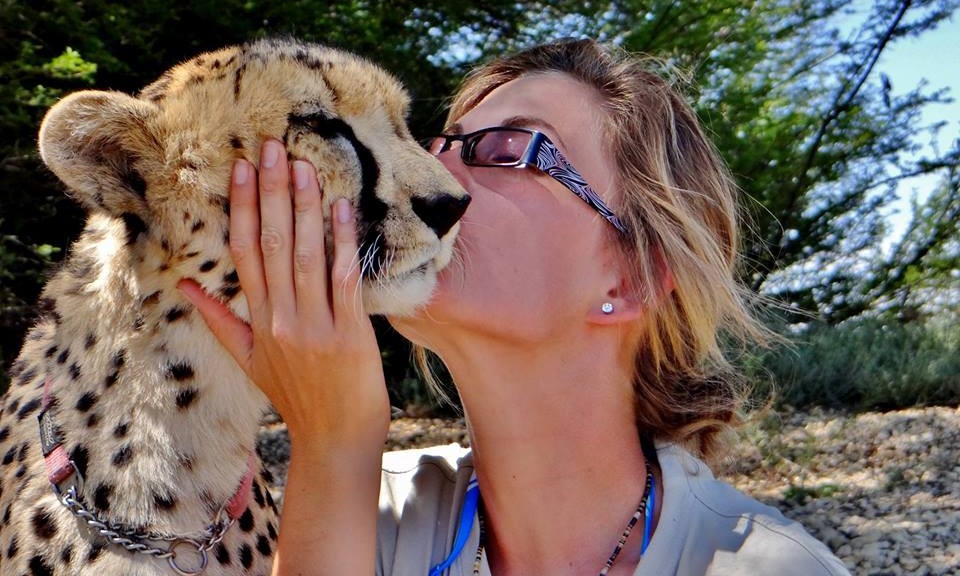 Embracing a love for animals from a young age, and growing up with cats, she decided to pursue a career in conservation and hit the jackpot when she heard that Inverdoorn was looking for extra cheetah handlers. “I’ve always loved wild animals,” she says. Getting to work with cheetahs is thus a perfect culmination of her passion. “I’m very fond of big cats and always wanted to work with them”. Her tasks entail cleaning enclosures and feeding the cheetahs. She has taken to the job so well that she has even started doing guest interactions with the cheetahs, predominantly with Velvet. “Velvet I like, because she’s quiet and likes to have people around”. They make a great pair, because they complement each other so well – Marlene soft-spoken and sincere and Velvet calming everyone with her serene presence and rhythmic purring.

Marlene has started working with Iziba too, which can be an intimidating experience. “Iziba is very playful, so she still scares me,” but Marlene’s calm nature comforts the cheetahs and she connects wonderfully with them as they warm to her. She has started doing guest interactions with Iziba as well, seeking any opportunity to learn and grow.

Born and raised in South Africa, it is astounding to discover that this is Marlene’s first time on a game reserve. She is a natural when it comes to the animals and keen to get involved even further. “I would like to work with the baby rhinos and the elephants. All wildlife, any wildlife, I can work with is really great for me”. Her love for conservation stems from her uncle: “He was in conservation and I realised I wanted to be as well”.

Having previously worked with birds of prey, handling owls and cleaning out eagle cages, it is not surprising to spot her walking through the lodge with Inverdoorn’s macaw perched on her shoulder, looking like an extension of her body as he beadily inspects those around him. Or her. The jury is still out on whether Coco is a he or a she, but whatever Coco may be Marlene says that “I’m the only female she likes”.

Inverdoorn allows people to break away from the hassle and hustle of the city where we become exasperated with others in offices, in traffic, in shops and every other place where technology demands speed and immediacy. The Karoo sets a mood both tranquil and relaxed, where the staff are keen to share and enlighten, making guests enjoy human interactions again, as much as the animal ones.