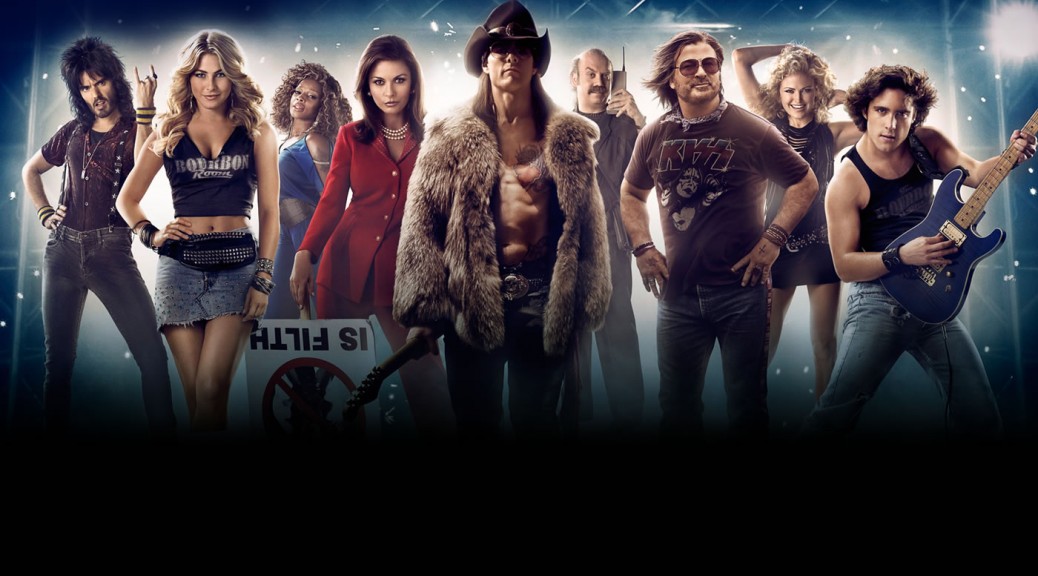 There is nothing I can do, but gush about this film. I loved it! Yes, it is all a very glitzy and glossy glamorisation of the American Dream, but frankly…who cares when you’re having this much fun? Rock of Ages is a relentlessly enjoyable film: highly energised and vibrant, with a cast to die for.

As I have said so many times before, I am often disappointed with the new starlets of the day; but I was impressed by Julianne Hough’s doughy eyes and sprightly step and her romantic lead: the delectably irresistible Diego Boneta. The rest of the cast are also pure magic: Malin Akerman is breathtakingly beautiful, with a voice to match, as the intrepid Rolling Stone reporter; Paul Giamatti’s agent oozes scum and slime while Alec Baldwin and Russell Brand are the inspired comic foil. The absolute scene-stealer and hero of the film, however, is Tom Cruise’s rock god Stacee Jaxx: a living embodiment of sex, drugs and rock ‘n’ roll. Cruise perfectly walks the thin line between send-up and tribute, without ever toppling over into either one.

The musical has long been one of my favourite genres and this film helped me remember why. I have no idea why I did not know that this was a traditional musical – with characters spontaneously bursting into song – but that is exactly what it is. Of late, musicals have often been morose biopics; thus, it is great to see the musical return to form and do what it does best: make you feel good. The cast all lend their own voices to the film’s soundtrack and with music from bands such as Foreigner, Poison and Twisted Sister this is a kaleidoscopic journey of joy back to the 80s. Hough and Boneta deliver sweet renditions of Waiting for a Girl Like You, More Than Words and Heaven and Russell Brand belting out We Built This City on Rock and Roll is truly orgasmic.

Based on the Broadway musical, the story is admittedly formulaic: small town girl arrives in Hollywood seeking fame and fortune, meets boy, falls in love, hearts are broken and yet all ends with a seamless, golden conclusion. It is in its bubbly and optimistic delivery of following your dreams and your heart that it excels.

Nothing could have been more apt than casting one of the pretty boys of the 80s as your aging rock legend. I have fond memories of watching Cruise in Top Gun and Cocktail when I was younger and seeing him personify the other side of the age in which he himself started becoming a legend is genius. His performance of Paradise City and Pour Some Sugar on Me recalled memories of Def Leppard and Guns ‘n’ Roses blaring out of my brother’s room when we were growing up. Finding all these elements wrapped up in a colourful and entertaining package of song and dance is then like Christmas come early for me.