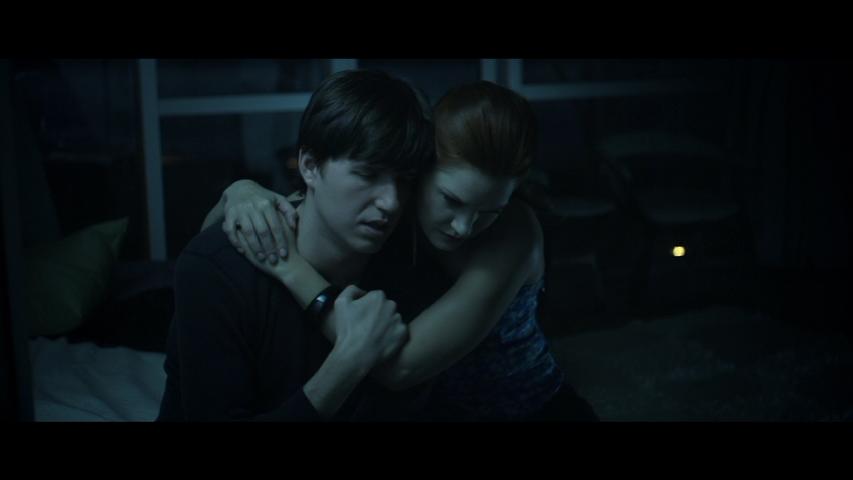 With the renewed surge of interest in vampire films, Daylight Fades tries to elbow its way into the canon, but is fully undeserving to any claim of belonging. Simply enough: a wimpy young man, Johnny, falls for Elizabeth, a confident and vibrant young woman and although they start a relationship she rebuffs his love a few months down the line. Distraught at her rejection, Johnny takes a drive with his best friend and weeps and whines about his plight, when suddenly they are ploughed down by a truck. As Johnny teeters on the brink of death Elizabeth suddenly realises she loves him and declares she will never leave his side, whereupon a dark stranger mysteriously appears and turns her boyfriend into a vampire so that they can be together forever.

The appearance of this dark stranger comes without explanation, as do many things in the film, and the revelation of who this stranger actually is, is revealed far too soon, bringing the film to its climax barely halfway through and causing the rest of it to drag.

There is a serious lack of imagination in the story and its presentation: vampires open up many exciting possibilities for make-up and other visual effects, but the film tries nothing and all the vampires look the same by day and by night, whether sleeping or feeding. Questions of morality and time also arise with a theme such as vampirism, which it briefly touches upon with the introduction of the roguish vampire Raven as she asserts their right to kill in order to live, but this is quickly dropped and forgotten.

The acting is truly atrocious and the two leads have absolutely no chemistry. Further, the fact that they are together before or after the accident makes little sense at all.

Plodding through the actors reading their lines and the unbelievable plot you are relieved when it finally draws to a close, but frustrated that the story is thoroughly redundant and comes to nothing in the end.