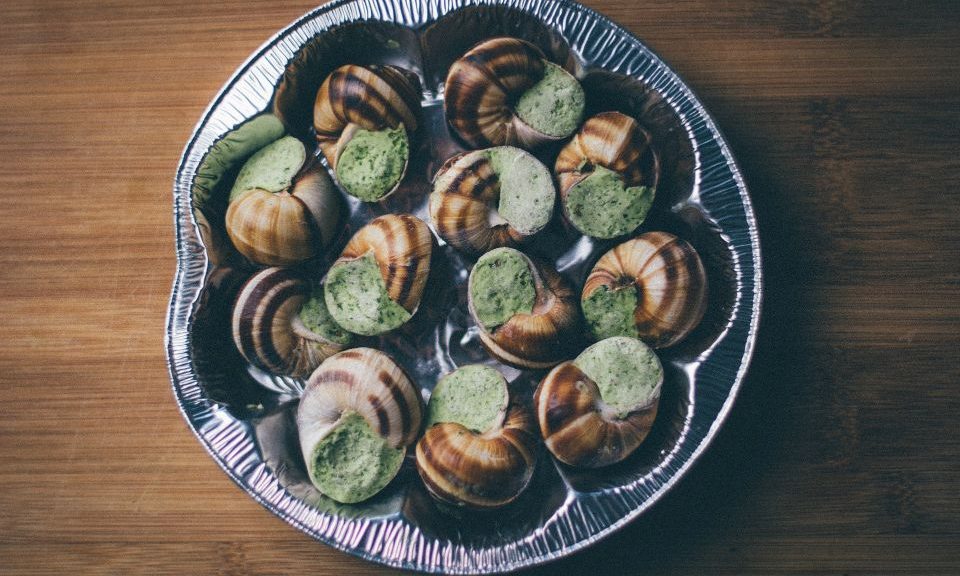 You’ve likely heard of escargot, probably even tried it. Maybe you’ve nibbled on cuisses de grenouilles or gulped down an illegal ortolan in one bite. In Mzansi, we’re actually quite used to eating all kinds of animals and their parts. After all, we eat mopane worms, chicken feet, warthogs, and ostriches. If anything, we have a lot to show those French folk with all their slippery snails, frogs’ legs, and whole birds. But in the spirit of learning new things, we thought we’d take a look at what other weird and wonderful animals other countries eat, continuing our global foodie trot that started with these food rituals.

Australia 🇦🇺
An intrinsic part of the land down under, kangaroos are also an intrinsic part of their plates. Just as we enjoy eating our national animal and turning it into biltong, so the Aussies enjoy eating kangaroo with a side of potatoes and onion rings. For the more adventurous foodie, there’s witchetty grub. The larvae of a large cossid moth, it can be eaten raw or lightly roasted over coals. Apparently, it tastes like almonds when raw and like scrambled eggs when cooked.

Cambodia 🇰🇭
If you’re arachnophobic, eating tarantulas might feel like the ultimate revenge. In Cambodia, they’re deep-fried and rolled in sugar or garlic to make a delicious, streetside snack. The history of eating these creepy crawlies is actually quite profound. Tarantulas became a staple in the 1970s during the Khmer Rouge’s tyrannical reign of power when people forced to the countryside had to eat whatever they could find in order to survive. These spiders became a lifesaver: easy to catch and incredibly nutritious.

China 🇨🇳
Speaking of arachnids, another edible one is scorpions. They’re a popular street food (in Thailand and Vietnam too), typically served on a stick. They can be eaten roasted, fried, grilled, or raw. If you find yourself trying to survive the zombie apocalypse, scorpions may be your saving grace – just make sure you remove the stinger and venom gland.

Japan 🇯🇵
You eat tuna, right? So waste not, want not: why not eat the eyeballs too? They’re quite bland though, so Japanese chefs love zhooshing them up with soy sauce and mirin or sesame oil and ginger.

Mexico 🇲🇽
Are you on a high-protein diet? Then gobble some grasshoppers. A popular snack in Oaxaca, Mexico – they’re even stuffed into tortillas – they’re known as chapulines and are said to have more protein than chicken, eggs, beef, and beans. Plus, they’re a much more sustainable food source than livestock. And it’s not just Mexicans who love them, grasshoppers are also beloved in Thailand and Uganda.

The Philippines 🇵🇭
Okay, so we hate pulling faces at food, but it’s really difficult not to when it comes to balut. A fertilised duck egg, the hard-boiled eggshell contains a duck embryo that makes for another protein-rich street food. The older the egg, the more of the duck you’re likely to see, like beaks and bones. The younger the eggs, the floatier it becomes with the embryo swimming on top of the yolk and egg white.

United States 🇺🇸
Kirsten and Detlev also gave us an example, while sitting around the dinner table at Tim and Shereez’s Instant Restaurant: Rocky Mountain oysters. What exactly are these delicacies? Despite their name – they’re also known as prairie oysters and cowboy caviar – they don’t originate from the ocean. They are actually bulls’ testicles rolled in flour and pepper before being fried. Yum?

The Rocky Mountain oysters are rocking the #MKRSA table! 🐂👀😬

Name one of the most unusual dishes you’ve eaten? pic.twitter.com/yICrvWVSHT

What unusual animals or animal parts have you eaten? Share them with us on social media using the hashtag #MKRSA.